The following is an adapted excerpt from Professor Harry Prosen’s Introduction to FREEDOM: The End Of The Human Condition. In it, Professor Prosen offers a wonderful analysis of the importance of Australian biologist Jeremy Griffith’s breakthrough, human-behaviour-demystifying-and-ameliorating explanation of the human condition — and a tribute to the extraordinary man behind this breakthrough understanding.

“The truth is, I am inadequate to write this Introduction, but everyone is, so I will do my best.

Firstly, to immediately put into context the fabulous significance of what Australian biologist Jeremy Griffith has achieved: he has delivered the breakthrough biological explanation of the human condition, the holy grail of insight humans have sought for the psychological rehabilitation of our species. This is the compassionate, redeeming, reconciling and transforming understanding of our lives that the human race has lived in eternal hope, faith and trust would one day be found and have so assiduously pursued since we first became conscious beings some 2 million years ago! In short, this is the most momentous event in human history! (See Video/​F. Essay 3 for Jeremy’s breakthrough explanation of the human condition.) 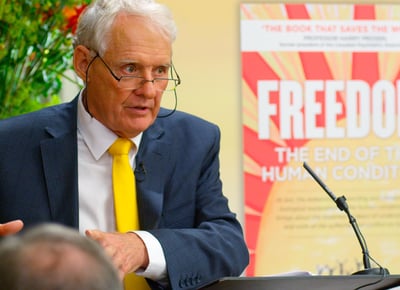 Jeremy Griffith at the launch of FREEDOM at the Royal Geographical Society in London, 2016

To draw on Jeremy’s own penetrating description, the human condition is our species’ extraordinary capacity for what has been called ‘good’ and ‘evil’. While it’s undeniable that humans are capable of great love and empathy, we also have an unspeakable history of greed, hatred, rape, torture, murder and war; a propensity for deeds so shocking and overwhelming that the eternal question of ‘Why?’ seems depressingly inexplicable. Even in our everyday behavior, why, when the ideals of life are to be cooperative, selfless and loving, are we so ruthlessly competitive, selfish and aggressive that human life has become all but unbearable and our planet near destroyed? How could humans possibly be considered good when all the evidence seems to unequivocally indicate that we are a deeply flawed, bad, even ‘evil’ species? (See Video/​F. Essay 10 for further description of exactly what the human condition is.)

But as my profession has taught me only too well, for most people, trying to think about this ultimate of questions of whether humans are fundamentally good or not has been an unbearably self-confronting exercise. Indeed, while the term ‘human condition’ has become fashionable, its superficial use masks just how profoundly unsettling a subject it really is. Again, the truth is, the issue of the human condition has been so depressing for virtually all humans that only a rare few individuals in history have been sound and secure enough in self to go anywhere near what the human condition really is. (See Video/​F. Essay 11 on the difficulty humans have had engaging with the subject of the human condition, including analysis of Plato’s cave allegory.) So for Jeremy to so freely and accurately talk about it as he does in FREEDOM, he clearly must be one of those rare few. Nurtured by a sheltered upbringing in the Australian ‘bush’ (countryside), Jeremy’s soundness and resulting extraordinary integrity and thus clarity of thought, coupled with his training in biology, has enabled him to successfully grapple with this most foreboding of all subjects for the human mind of the human condition and produce the breakthrough, human-behavior-demystifying-and-ameliorating explanation of it.

I would like to emphasize the height of my regard for him. He is the most impressive person and courageous thinker I have ever met and no doubt ever will. Normally people disappoint you at some point, or on some occasions, but Jeremy never does. Basically he is not egocentric. Being exceptionally well nurtured with unconditional love as a child he is sound and secure in himself and as a result is not preoccupied having to prove his worth all the time like most people are. Free of such selfish self-preoccupation he is selflessly concerned only with finding a way to end all the suffering in others, which has resulted in him focusing on finding the solution to the human condition. And being sound and secure in self has meant that in tackling that issue he has been able to think in an unafraid, truthful and thus effective way about it; as the philosopher Nikolai Berdyaev acknowledged, ‘Knowledge requires great daring. It means victory over ancient, primeval terror…​it must also be said of knowledge that it is bitter, and there is no escaping that bitterness…​Particularly bitter is moral knowledge, the knowledge of good and evil [which is the issue of the human condition]. But the bitterness is due to the fallen state of the world…​There is a deadly pain in the very distinction of good and evil, of the valuable and the worthless’ (see par. 14 of FREEDOM). 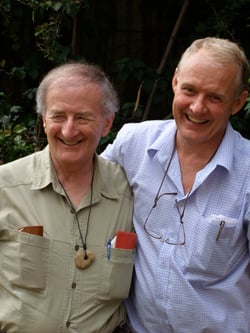 Harry Prosen with Jeremy in Sydney in 2007

It is quite amazing, in all my years of meeting people and practicing psychiatry, I haven’t encountered a soul like him. He is one of those incredibly rare individuals, a person of intellectual rigor and personal nobility who has the capacity to be completely honest without a personal bent; when you are with him you can feel his passion for the truth, which he embodies. Indeed, meeting Jeremy as I did after reading so much of his work, I realized that he lives 100 percent in the world that he writes about — an immensely inspired, child-like-zest-full, enthralled-with-all-of-life, truthful world where the human condition is at all times being addressed and understood. Unlike everyone I have ever come across, for whom discussion of the human condition is so extremely difficult (almost impossible, one might say), when you talk to Jeremy about the human condition and the biology surrounding it, the world changes, everything seems possible, biology makes sense. Logic — simple and obvious truth — replaces over-complicated intellectual scientific downright rubbish — the vast majority of it. Indeed, science — and biology in particular — is so saturated with evasive, dishonest denial that the denial-free world of understanding that Jeremy introduces us to is so new it is akin to having to start your education all over again! (See for example, F. Essay 25: The truthful biology of life.) Jeremy’s capacity for unerring and unrelenting honesty is literally staggering, but, as you will see, it is always accompanied by understanding; his is no ‘feel good’, guru-like, false prophet form of totally dubious and ephemeral ‘help’ for humans’ troubled lives, but a get-to-the-bottom-of-all-the-problems, truthful, real, insightful, ameliorating love that the world has been so in need of. And, thankfully, right through all the vehement resistance that he has faced and overcome in the last 30 years of his life, which took him near to death, Jeremy never gave up his responsibility that he saw right from the early years of his completely-nurtured-with-love upbringing to deliver the understanding of human nature that would end all the suffering in the world.

Since coming across Jeremy’s work almost 15 years ago and realizing its enormous world-saving significance, I have kept one of his pieces of writing with me at all times. Having these insights into what it means to be human brings such clarity and change to everything, that staying in close contact with them in a world that is so distressed and psychologically crippled brings me relief, security and optimism for the future like nothing else I have ever encountered.

Jeremy is the ultimate psychotherapist, the psychotherapist for psychotherapists — in fact, all the great theories I have encountered in my lifetime of studies of psychiatry can be accounted for under his explanation of human origins and behavior.

I want to emphasize that Jeremy does describe the world exactly as it is with all its imperfections, but just as he describes all the horror of the world he also provides the insight into our condition that makes possible the only real hope, optimism and downright, out-of-your-skin excitement for the future of the human race and our planet — a transformational experience Jeremy introduces us to in F. Essays 15, 33, 36, 57 & 58, and of course chapter 9 of FREEDOM. Indeed, while the overall significance of FREEDOM is its ability to transform the reader — and thus the human race — by presenting the most relieving, uplifting and positive story ever told about humans, the explanation of the human condition in chapter 3 of FREEDOM (which is summarized in chapter 1 and the subject of Video/​F. Essay 3) is so amazingly accountable, insightful and relieving that it alone will transform you.

The importance of the ideas in Jeremy’s books is immeasurable. The depths they enable us to reach in understanding ourselves and our world is bottomless. The great impasse to a full understanding of our existence has finally been breached. This truly is it, the day of days, the coming of our species’ moment of liberation, the implications and context of which Jeremy fully deals with in paragraphs 1278–1279 of FREEDOM.

I am so very, very fortunate to have spent time with Jeremy and to have spoken with him almost fortnightly for almost 15 years — however, it is not who Jeremy is, but what he has done that is so important and in this regard I commend his work to you with all my mind, heart and soul. You are in for an absolute feast of knowledge, insight and ultimately love like you could never have imagined.”

Dr Harry Prosen is a professor of psychiatry who has worked in the field for over 50 years, including chairing two departments of psychiatry and serving as a president of the Canadian Psychiatric Association. Professor Prosen was recently appointed one of 500 Specially Selected Fellows of the American College of Psychiatrists, and a Distinguished Life Member of the American Psychiatric Association. He is also psychiatric consultant to the Bonobo Species Preservation Society.